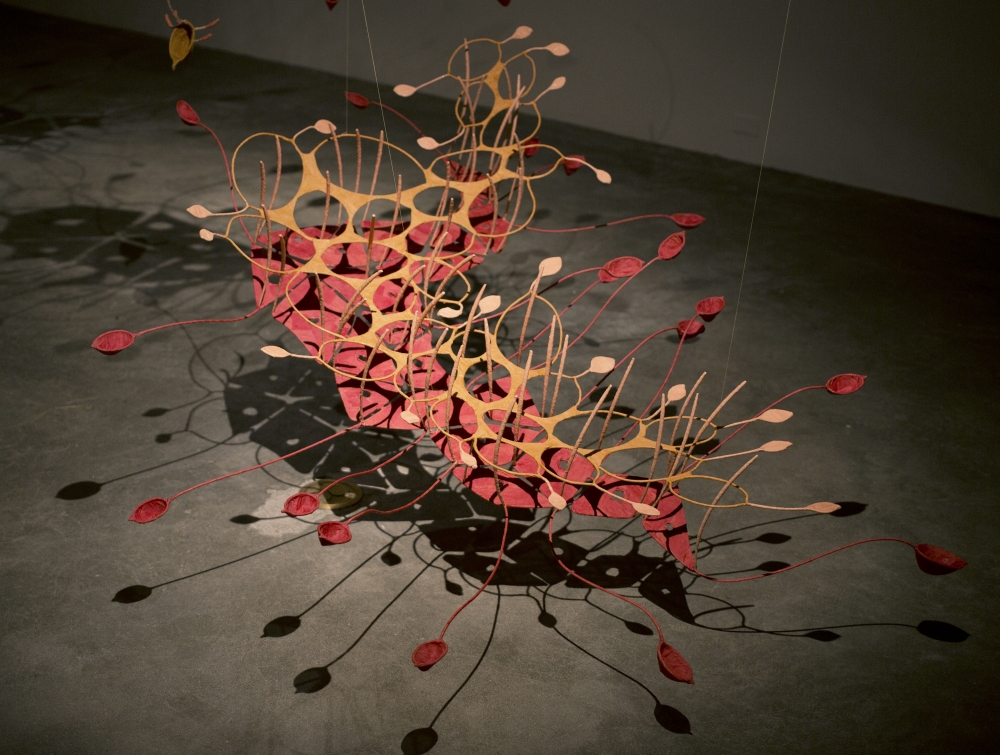 Seven ponds and a few raindrops, 2017

The South Asian Artists Making Their Mark on the Western Scene

In Ranjani Shettar’s installation “Seven Ponds and a Few Raindrops,” looping, delicate steel forms covered in tamarind-stained muslin sway ominously in midair, evocative of parched flora or exoskeletons. Reimagining local craft traditions to create abstract sculptures, the Indian artist’s work, which was on view at the Metropolitan Museum of Art this summer, speaks elegiacally to environmental loss, to historic relationships with the earth and to future uncertainties. While visually distinct, the installation at the Met couldn’t help but be in conversation with another: “We Come in Peace,” Huma Bhabha’s much-photographed two-part sculpture of a figure shrouded in a black garbage bag prostrating before a godlike giant, which conjures a haunting narrative of war and brutality, and of our ongoing grappling with the other.

Shettar and Bhabha share a commitment to materiality, to sculptural innovation and to work that responds to the precariousness of our current day. They are also among a select group of women who are forging new narratives about contemporary South Asian art — and receiving unprecedented attention from major institutions in the United States. “Ten years ago, museums were not looking at us at all,” says Aparajita Jain, who directs Delhi’s renowned Nature Morte gallery and works with many increasingly prominent South Asian artists, including Benitha Perciyal, Reena Saini Kallat and Gauri Gill, whose dreamlike photographs exploring indigenous communities and social class were on display at MoMA PS1 this summer. “They’ve suddenly said, ‘Oh wow, there is a lot going on here.”

Before 2013, neither the Met, the Museum of Modern Art, nor the Guggenheim had featured a solo exhibition of a South Asian woman. While some have been present in occasional regional surveys — primarily at institutions like the Asia Society and the Queens Museum (where the influential 1997 exhibition “Out of India” helped introduce contemporary art from the subcontinent to U.S. audiences) — Jain believes those group shows were often reductive. “It was a basic overview, a 30,000-foot view,” she says. “Now, there’s a much deeper conversation going on.”

That’s evident in a cluster of solo shows in New York and beyond. This year, Bharti Kher’s tender sketchbooks on gender, motherhood and the body were up at Isabella Stewart Gardner Museum in Boston, where a large survey of Huma Bhabha’s work will open at the Institute of Contemporary Art in March. Next summer, the Met Breuer, which opened in 2016 with a retrospective of the work of the radical Indian minimalist Nasreen Mohamedi, will pay tribute to the work of another groundbreaking South Asian woman — Mrinalini Mukherjee. Additionally, MoMA recently acquired a monumental photographic installation by Dayanita Singh, a selection of empathetic and wry photographs by Ketaki Sheth and a major work by Sheela Gowda, who transforms found local materials into stirring meditations on labor and marginality.

According to Shanay Jhaveri, the Met curator behind the Shettar and Bhabha installations, a heightened focus on South Asian women flows from American museums actively thinking more globally and beginning to reckon with long-held blind spots. Indeed, Jhaveri’s mere presence is evidence of what he calls a “concerted effort” on the Met’s part: Brought on in 2016, he’s the museum’s first curator of South Asian modern and contemporary art, one of a number of newly created positions focusing on the non-Western world. “What’s happening is a reconsideration of our received art histories,” Jhaveri says. “Part of that is an acknowledgment that there are a number of female artistic practices that have been overlooked, marginalized or forgotten.”

Another explanation may lie in the vicissitudes of the art market. In the mid2000s, amid an accelerating economy and eagerness about emerging markets, Indian contemporary art was deemed a booming industry. Dominating the scene were a handful of artists — mostly men — who projected characteristics of South Asia in art-fair friendly ways: enormous installations comprising Indian cooking vessels, large-scale pop renderings of deities; a rickshaw made of bones. (As the New York Times art critic Roberta Smith wrote, this was work that looked “just the way successful global art is supposed to: sleek, smart and familiar yet exotic.”) Speculators drove up prices until works regularly sold for millions. In 2008, though, the financial crisis hit and the bubble burst. Values plummeted, investors fled and collectors backed away.

In the decade since, the market has remained cautious. But diminishing commercial pressures seem to have created room for complexity and nuance — for women, for artists who truly expand conceptions of what South Asian art can be. “Before 2008, it was like, ‘The next hot spot is India and we must figure it out,’” says Jain. “Now, institutions are finally recognizing these people as artists and not only as the next wave.”

The shift is also apparent in South Asia itself. The last decade has seen the emergence of the Kochi-Muziris Biennale, the Dhaka Art Summit and the Lahore Biennale; private contemporary art institutions like the Kiran Nadar Museum; galleries and arts spaces (many run by women); and a new generation of scholars and critics. This increasingly vibrant regional activity facilitates access and depth of understanding for those abroad. In addition to directing Nature Morte gallery, Jain runs Saat Saath Arts, a foundation devoted to bringing international curators to India. “To understand an Indian artist, you have to land in a place like Delhi or Mumbai, navigate the streets to some nondescript little cubbyhole of a studio where the artist is working,” she says. “We want to make it easy for them.”