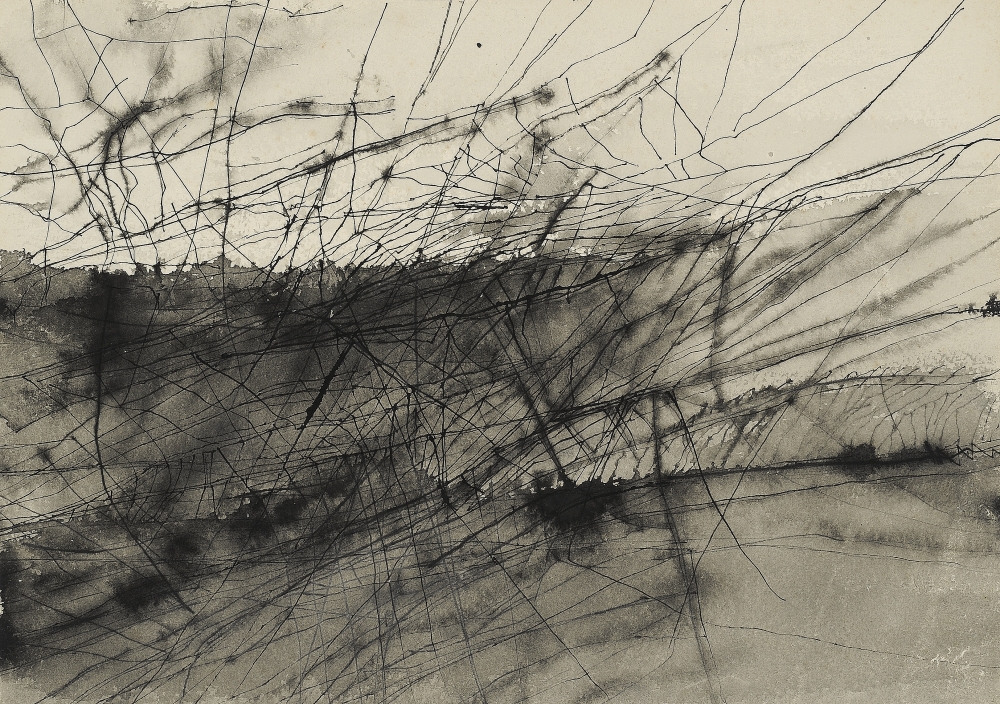 When the Met Breuer opened last month in the old Whitney Museum building on Madison Avenue, all the talk was of “Unfinished: Thoughts Left Visible,” a sprawling group show traversing six centuries of art in the European tradition.

No wonder: The show, which runs through Sept. 4, contains works by Leonardo, Van Eyck, Rembrandt, Michelangelo, and Titian — and that’s just the opening salvo.

Largely overlooked amid the puckering of critical lips provoked by that show’s (I thought) splendid ambition was a second, monographic show devoted to Nasreen Mohamedi. That’s a shame, because Mohamedi was a great artist.

Born in Karachi in Pakistan in 1937, she died not terribly far away in Baroda (now Vadodara) in India in 1990. She made small, abstract, linear drawings and took black-and-white photographs. So her show, unlike “Unfinished,” is restrained, small in scale, and almost entirely lacking in color.

But it is riveting. And in many ways, it presents a concise, alternative take — among the countless alternatives already presented in “Unfinished” — on the whole impossibly baggy idea of “thoughts left visible.”

Mohamedi was a modernist working in India. She made work in a tradition that combined early European modernism with transcendental impulses found in Sufism and Zen Buddhism.

There were other influences, too. But the point is that her art was extremely personal and impossible to categorize.

You could say that Mohamedi ticks various boxes that the Met — if it is to get with the times and speak to a truly diverse and global audience — needs to tick. But time spent with Mohamedi’s meditative and quietly challenging work suggests that this may have it the wrong way around. The Met should not be ticking boxes. It should be showing us powerful art by original artists, wherever they are to be found. If its curators do this properly, if they look widely and avidly, the boxes will tick themselves.

I first saw Mohamedi’s work in the 5th Asia Pacific Triennial at the Queensland Gallery of Modern Art in 2006. That show’s curator, Suhanya Raffel, had displayed Mohamedi’s entire photographic oeuvre along with a small selection of related drawings.

As a result, I initially thought of Mohamedi as primarily a photographer, one who had a special eye for abstract markings in architecture, diagonal white lines on roads, taut threads on looms, gridded patterns in brickwork, and the transient, crinkling undulation lines in water and sand.

But in fact, Mohamedi was only incidentally a photographer. She was fascinated by the medium — she used a Nikon F2 — and she learned a great deal from it. But she never showed the photographs she took during her lifetime.

She needed to think things through for herself, without any kind of mechanical mediation. And so she drew. There is no better way. And her drawings became more and more extraordinary.

Mohamedi was born a Muslim. She was one of the first Muslim women in modern India to pursue a career in fine arts. She overcame considerable obstacles. An abandoned engagement in the wake of a betrayal left a deep emotional wound.

She also suffered from Huntington’s disease, a genetic condition that affects muscle coordination and can lead to mental decline.

Two elder brothers suffered from the same disease. It is hard not to look at Mohamedi’s extraordinarily controlled art as the sign of a profound desire to transcend physical and emotional frailties and seek out deeper, more pristine, and impregnable truths.

Her Muslim upbringing inculcated her from early on with a sense that the visible world veiled a deeper, mysterious reality. She was interested in Islamic architecture and its symbolic decoration, as well as its connections to cosmic processes and numbers.

But, studying in London and Paris and traveling widely, she was also influenced by Western philosophy — especially the Existentialism of Albert Camus — and by the spiritually inclined aspects of modernist abstraction. She responded in particular to Kandinsky, Klee, Michaux, Mondrian, Malevich, and the Russian Constructivists.

Back in India, she lived in a very spare house with a studio she kept fastidiously clean. According to her friend and one-time student Roobina Karode, it had “the ambience of a Sufi haven.” She loved observing shadows and everyday light effects, and had a special affinity for deserts and the sea.

After a productive time toying with collage and oil painting, she stopped working at an easel and focused all her attention on works on paper.

She compensated for the steady deterioration in her fine motor skills by forcing herself to be ever more precise in her drawing. She refused to date or label her works. It is not always clear which medium she applied with which tools.

Early on she used quills, pens, and calligraphic brushes. Later she simplified, ridding her images of everything but line. She often used technical instruments to steady her hand.

A devoted student of the laws of perspective, she created extraordinary subtle meshes of fine angled lines. These can call to mind both architectural drawings and the early wall drawings of Sol LeWitt or the paintings of Agnes Martin.

But, despite Mohamedi’s deep interest in optical laws and geometry, there was little about her approach that was conceptual or systematic. Like Ellsworth Kelly, whose work was grounded in observations of nature (and who often made use of photography), Mohamedi was an intuitive artist. She used grids and mathematical progressions, but brought them alive in unpredictable ways.

She was increasingly audacious in her experimentations with space, and in the late 1970s and early ’80s she abandoned grids and vanishing points. Her work took on a new intensity, suggestive of movement and spirit, and an almost transcendent idea of pure vision.

An intensely private person, Mohamedi rarely verbalized the way she thought — although she did leave behind many notebooks that offer clues. Her early heartbreak had left within her a “terrible void,” she noted at the time — one she didn’t know “how to comprehend.”

In her art, she seems to have been released from the burden of comprehension and yielded herself up to that terrible void — which was also, say the mystics, the divine, the infinite.

Such are the thoughts she left visible. She died at the age of 53.

View More on the Boston Globe