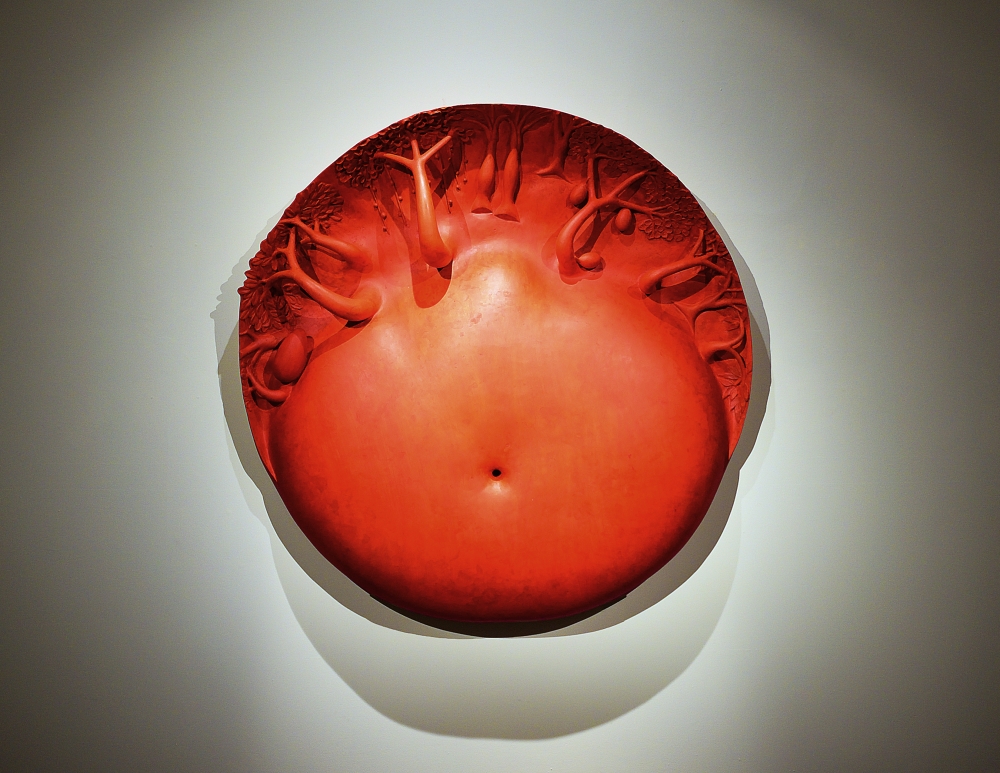 Mother at the Forest, 2009
Acrylic on fiberglass, marble dust
59″ diameter

Thiruvananthapuram-based artist N.N. Rimzon is known to reflect his socio-political concerns through his works. Inspired by eminent Indian artists like Ramkinker Baij, he is exaggeratedly naturalistic and uses distinct figures of human vulnerability to present a larger picture to the viewer through his simplistic artwork. After a gap of 23 years, the artist is back with a solo exhibition in the capital titled ‘Forest of The Living Divine’. The collection of 20 works consists of sculptures, paintings and installations done between 2007 and the present.

His works — mostly figurative — are conceptual and minimalist in nature through which he pares down typical imagery in order to reach the core of things, basic states and fine qualities of humanity. “Most of my works have a connection to nature, farming, fertility and festivities. There are references to the mother goddess also,” says Rimzon.

In this exhibition, he has extensively showcased fertility and motherhood. ‘Mother At The Forest’ is a large sculpture made of fibreglass that is made to look like the womb of a pregnant woman, with trees growing along the edges. ‘Big Maa’ is a sculpture that is a penis-like totem anchored in a spherical vessel and adds to it symbols of fertility. The artist explains, “Although much of my work can be termed as figurative, my approach to the creation is conceptual rather than dividing it into categories like figurative and non-figurative.”

In this exhibition Rimzon affirms his practice as an extension of and distilled from the classical thought and traditions that have continued to infuse life and art in India for millennia. At the same time, there is a sense of peace in those of Rimzon’s works that have no human characters. Rimzon points out, “I want them to have an ability to heal.”

He also adds, “Much of my work might appear to be figurative but there is an underlying representation of spiritual, political or social concerns.”

The human form and its suggestions while ubiquitous in three dimensions, are absent from the flat coloured planes of his canvases, as if beckoned by the artist to step off the canvas and into real space to engage with the world in all its fullness. The presences of human figure in his works are often accompanied by skulls and bones suggesting death and destruction. In his work titled ‘Death of an author’, he showcases a cross-legged man emptying an earthen pot filled with red liquid over his head, making a direct reference to author Perumal Murugan, who, in January 2015, announced that he was giving up writing after he came under attack for his novel Madhorubhagan.

Rimzon lays bare the simplified constituents of his work, disarming the viewer while igniting poetic trajectories for them to embark. Talking about some of Rimzon’s works, Deepak Talwar, the director of Talwar Gallery expresses, “In his work titled ‘Devotee’, a figure sits hands folded and cross-legged, on a circular platform that seems to be at a certain magical threshold, as if it would be levitating any moment. On the other hand ‘Tree at Shrine’ takes us to a time when devotion and worship were unencumbered by binds of religion, where one could seek to connect to something beyond by creating meaning with the simplest offerings of nature.”

View More on The Asian Age