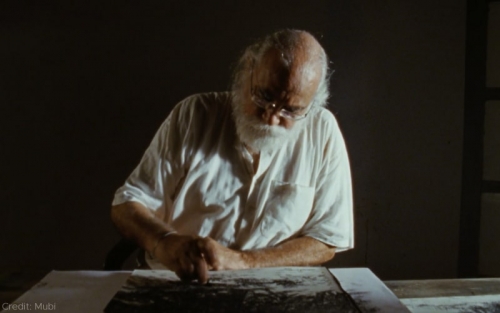 Amit Dutta’s The Seventh Walk, On MUBI: A Confluence Of Art With Nature’s Canvas

The German theorist Olaf Moller, one of the most reputed critics and film programmers in the world, had the following view of Amit Dutta’s The Seventh Walk (2013) at the film’s screening in Rome: ‘It is his finest film – a true tour de force of color, structure, and rhythm developed out of contemporary artist Paramjit Singh’s works in oil and charcoal, an amazing synthesis of painting and cinema.’

That becomes reason enough to explore The Seventh Walk (Saatvin Sair), created by the flagbearer of contemporary Indian experimental cinema. Like Dutta’s most notable work, Nainsukh (2010), this film too offers a kaleidoscope of breathtaking visuals and aural sensations. The lush green images of trees, plants and shrubs in a mysterious forest are hypnotically soothing to the eyes. Dutta hijacks the viewer’s senses totally by accentuating the distinct sounds of different natural elements — the buzzing of insects, the spiraling sounds of the wind, and the soul-cleansing reverberations of the flowing water in the natural landscape.

The poetic beauty of the dense woods and its riveting soundscape is reminiscent of the ‘zone’ in Andrei Tarkovsky’s The Stalker (1979). Here, too the mysterious forest of the Kangra Valley inhabited by the painter Paramjit Singh has its unique way of functioning much like the ‘zone’. It’s a magical world where elements of fantasy overpower the conventional rules of the world we know.

We see Paramjit exploring the vast forest seeking inspiration from nature and coming back to his home studio in the forest to sleep, rest and paint. He sits under a tree and the camera glides up to its branches. By the time it has come down, we see a pile of rocks instead of the painter. There are more unusual things happening in this mysterious place. Rocks occasionally levitate, a plane flies above the forest, it is seen by three human beings who appear from nowhere in this uninhabited land. We read in the intertitles that an invisible maiden is capable of moving rocks. Then there is a young girl who can fly and Dutta’s camera positions itself at the point of view of her shoes.

All these bizarre events are reflected in Paramjit’s paintings. So, is this a real magical world hidden from us in some obscure forest, or is it merely a reflection of Paramjit’s fantasies? We see the painter navigate the forest land and come back to his hut and paint his observations on canvas. Does this imply that we are being placed in his mind’s imaginative track? There are no answers provided in the film and, like most great art forms, it is subject to an individual’s interpretation.

Dutta employs a few artistic innovations in The Seventh Walk that lend the film its mystical or spiritual vibe. The superimposition of nature’s visuals over each other, juxtaposing the forest landscape with the paintings of Paramjit, and the meditative gaze on the diverse flora of the region occupy a majority of screen time. All these experiments in cinematography and editing are supplemented by the masterful use of Mohi Baha’ud-din Dagar’s Rudra Veena. The aural hypnosis of nature’s rhythmic sounds is frequently interjected with the melancholic strings of the veena, which complement the poetic green visuals.

The Seventh Walk is perhaps the most abstract of Amit Dutta’s films. It is more formal and minimalistic than the others and has no dialogue or voiceover throughout its runtime of 72 minutes. Even the narrative is hard to define and doesn’t rely on any structure. It is a work of art meant to be absorbed by surrendering one’s senses sans the faculties of understanding and interpretation.