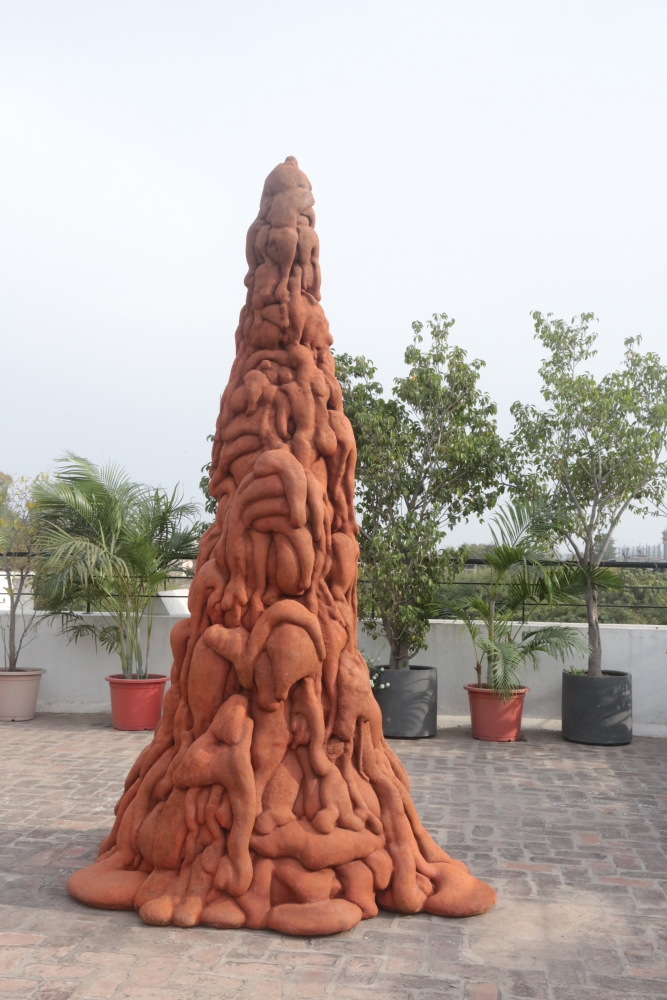 On a road trip from Las Vegas to the Grand Canyon in 2009, Alwar Balasubramaniam decided to make a pit stop at the Carlsbad Caverns in New Mexico. He wasn’t disappointed. The underground caves, with their cathedral-like aura and magnificent natural formations, enthralled him, planting the germ of an idea. A decade later, this vision of stalagmites conjured by slowly dripping water informed his sculpture Study for a liquid mountain, 2017–18. Situated on the rooftop of Talwar Gallery in Balasubramaniam’s recent exhibition “Liquid Lake Mountain,” the towering fiberglass-and-iron structure appeared to be fashioned out of a molten mass of entwined roots, tree trunks, and bodies both human and animal.

The invisible forces of nature and their effect on the material world continue to engage the artist. In the past, he alerted us to the slow accumulation of materials and memories in the stratification of rocks, the distorting play of magnetic fields, and the weathering nature of the wind. Now, the traces left by swirling waters in a mudslide could be spied in the brownish, cloudlike, fiberglass forms of Under Current, 2016, while Red Earth, 2017, summoned scenes of torrential rain cascading down the brick-red laterite hillsides in South India.

This is not surprising, given the artist’s move in 2015 from the southern Indian city of Bangalore to the more scenic environs of his birthplace, Tirunelveli, Tamil Nadu, near the very tip of the subcontinent. Drawing inspiration from the undulating landscape and lakes of his new surroundings, Balasubramaniam poured copious amounts of pigment and binder onto his canvases, where they formed controlled pools of color. The evaporation of these liquids has left behind residues and gentle fissures in Liquid Lake Mountain, 2017, mimicking nature. In Up in the air, 2017, the ruptures on the surface of the canvas are more forceful, evoking memories of the cracked earth left when bodies of water dry up. The fissures also serve to underline a sense of loss as liquids transition from one state of materiality to another.

These evaporated lakes of color appeared to have been carried on the backs of invisible forces into another room in the gallery, where they settled on one of its walls. In the site-specific wall painting Untitled, 2017–18, color metamorphosed into light, producing an iridescent halo while illuminating a gently floating cloud. Luminescent clouds also staged an appearance in another painting, Untitled, 2017–18. In a couple of minimalist framed works made of acrylic and cotton mounted on fiberglass, both Untitled, 2017, barely discernible cloud-like forms revealed themselves only to a patient and sensitive eye. Another work, Untitled, 2017, was a one-foot-square canvas occupied by striking, more or less concentric bands of undulating color that the artist created by harnessing the varying properties and densities of different pigments.

Nodding to the natural processes of sedimentation, Balasubramaniam often layers materials before sculpting them. In Seeing the sea as a shell, 2016–18, he interspersed terra-cotta tiles with cement before fashioning them into a cochlea-like form. In Withhold, 2017, he joined strips of plywood to create two wooden objects that appear to engage in a conversation on concavity. By foregrounding the ease with which matter can be converted into states of immateriality, Balasubramaniam reveals to us how flesh might be sublimated into spirit.