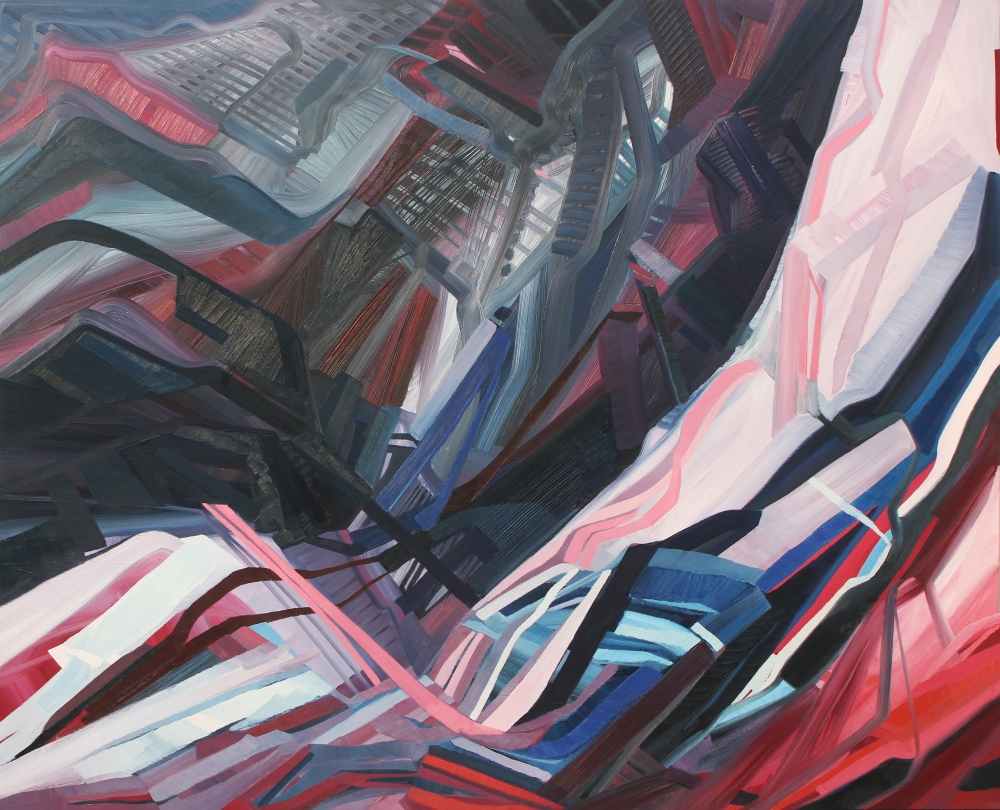 In Sheila Makhijani’s exhibition “This That and The Other,” a disarray of strange, vibrant objects lies before the viewer, as if they were artifacts from some underwater civilization revealed by the ebb. The glazed and unglazed ceramics of All over the Place, 1994, resemble clothes irons, shells, and teeth. Their bright colors are a distinctive feature of Makhijani’s work and imbue her abstract paintings with a kinetic charge.

The large oil canvases, for instance, scream havoc. The vantage of In front of me, 2018, seems to be from inside a volcano, looking up mid-eruption, and So much for now, 2018, looks like the inside of a car accident, a barely glimpsed high-rise distorted by rectilinear swaths of paint. On the gallery’s terrace, Flying High, 2018, an acrylic mural on the building’s granular wall, underscores the textural quality of Makhijani’s oils. Up close, glistening scaly patterns and ribbon-like loops are scratched into the puckered layer of paint.

This relationship between surface and medium is echoed in the figure-ground play of the gouaches. These, like the twenty-five-part series titled “This That and the other,” 2017, are dominated by an expressive line and have the appearance of multicolored, animate splinters piercing negative space. The linear complexity of Makhijani’s two-dimensional works is apparent also in the transparent acrylic cubes, engraved with intersecting angular shapes, of Just IN Just OUT, 2018. Arranged in an architectural formation reminiscent of Pooja Iranna’s staple-based structures, these glassy bricks cast elongated shadows onto the wall, creating spectral skyscrapers that echo Georgia O’Keeffe’s. The penumbral grid arrests, almost more so than the actual work, with a flattened three-dimensionality, once again drawing attention to the vexing status of the surface as both site of abstraction and dissolver of planar distinctions.