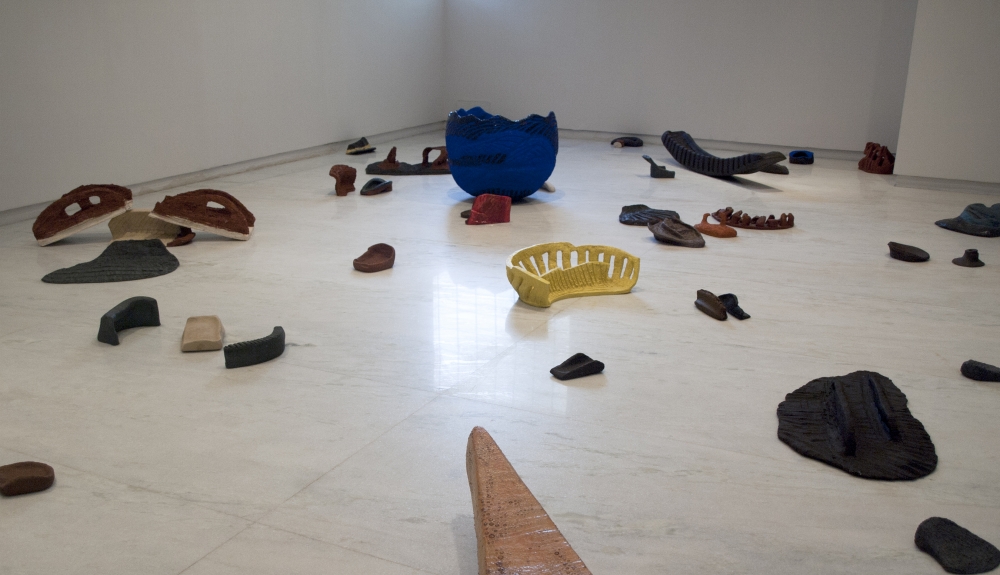 The Secret Life of Sheila Makhijani

It is a rather unusual sight – the small, unadorned, jeans-clad painter, almost invisible, hidden behind a large canvas, painting in thick swashed of an undiluted blue with a remarkable physicality and energy, clearly totally absorbed in muscular abandon with her paintbrush and knives. In her studio above her parents’ house, she works in complete isolation and silence, removing herself from almost every spectator. This forms her little world, where this prolific artist has been ‘hiding’ herself and the colossal body of her work – almost all unshown – for the past 12 years! Certainly, big surprises were in store when I went over to Sheila Makhijani’s studio, where, quite literally, few have gone before.

Sheila’s apparently naïve and light-hearted works, I discover, actually emerge out of rigorous practice and the ordering of the chaotic mind. Sheila makes innumerable drawings, which I see as exercises in understanding formal construction, before starting the final work on canvas or paper, where she prefers a direct plunge onto the surface.

Temperamentally inclined to order, the phenomena of the world into graphic symbols, drawing and sketching become natural, almost compulsive tools to sharpen this sensibility. Her drawings strive to take objects beyond their familiar nature, for which the very first condition demands that one give up the representation of the visible and grasp its underly ‘abstract’ design/ Sheila starts abstracting the objects often into pure shapes, inventing fresh anatomies for them by the interweave of lines and colours, diluting the literalness of the object to move from the ‘see’ to the ‘sensed’ object, to a more enigmatic one.

Formal elements, instead of being building blocks of representation, become magical toys to play with and through play they become all powerful in themselves. They are to be seen in their physicality without metaphysical layering.

To Sheila, engagement with the empty canvas is all about ‘self-encounter’. Dismissing impediments such as stylistic preoccupations or rule-bound working, aesthetic decisions are processed as she proceeds, with each brush stroke prompting and engaging with the other in a specific way with a fluid logic. No wonder, the creative process provides Sheila the joy of self-oblivion. The pursuit of aesthetic purity is catalysed by the surroundings and objects immediately registered which are highly significant to her work.

Sheila is particularly enamoured of man-made objects. Her observations could be of almost anything – from chairs, tables, beds, a spiral-bound book to curtains hanging, to casual compositions noticed on the streets such as vehicles with tied transported goods, fish nets at the river or architectural details. The object, to Sheila, is but a point of departure as it is transformed through imaginative projections. That has also meant moving away from explicit subject matter, erasing the descriptive content so that the work cannot be pinned down to any specific communication.

Sheila translates visual stimuli into the fundamental elements of line, colour, tone and texture – the resulting forms which escape the grip of representation, become magical toys to play with and through play they become all powerful in themselves. They are to be seen in their physicality without metaphysical layering. Lack of meaning may even be the intention of the work. In fact, Sheila titles her work lightly, as she fears too much being read into it.

The transference of her childhood obsession of scribbling on walls to drawing with paint on wall-sized canvas was not entirely smooth. For instance, there was no exposure to the visual arts at school. Interestingly, she chose tailoring from among the courses that were offered and quite enjoyed the combination of precise contouring in cutting and stitching cloth and the freedom of colourful patterning to adorn it. Since her formal art training at the College of Art in Delhi, Sheila had very littler inclination towards drawing human form, but as it was mandatory, she did imbibe the skills to draw anatomy and portraiture. She could not cope with human models – needing them to be absolutely still, failing which her drawings would turn into caricatures with distorted limbs.

She became fascinated with objects, finding the surroundings to be more rich and potent with visual surprises. A short stint at Santiniketan for her Masters in Graphics reinforced the recognition that rigid academicism notations, carry moments of high chaos and exaltation as she tries to order space. One sees an excavation of the potential of the white paper base through a liberal use of charcoal. The structuring and shaping of space emerges as a result of sweeping horizons, superimposition of viewing angles, arrangement of dots, arrows and the beautiful tracery of lines that criss-cross or cross hatch densely to make us see surface and depth on one plane. The clarity of Sheila’s ‘learned unconsciousness’ is truly striking.

Sheila works with many different mediums and it is almost imperative for her to seep into the materials she uses to sensitise and examine the inherent nature of each to potentialize her aesthetic expression. Though Sheila’s drawings are now her primary engagement, she really enjoys working in oils. Oil is the most sensual of all painterly mediums and, for Sheila, the physicality of the painterly act, the deposit of sumptuous paint on the spatula or the tip of the brush, the mark-making, are the most thrilling aspects of her undertaking.

Sheila loves shifting to collages and often concretises her need to comprehend physical space by moving to sculpture and installation. Her unusually larger and dwarfed ceramics were displayed as free objects, casually placed on a gallery floor in Amsterdam. The Fence, installed in the Light and Enlightenment show, is modular with tubular units, tightly joined and yet flexible to take any shape in the space within which it is placed. Holes are punched to trap light in and create a cascade of light and shadow which has always been a part of her work irrespective of the medium. At a workshop in Uganda, pre-cut shaped were coloured red in acrylic to become the base of a wire and paper structure with the cast shadow as its most eye-catching detail. Wires in er sculptural forms substitute lines in her drawings. Also the magic of yellow at the margins cannot be missed. Freer to innovate at the Khoj workshop, she was thrilled with her foam and knitted insects eerily crawling on the trees on site, surprising the viewers who discovered them.

There are two approaches to Sheila’s working – one, via abstractions on artificial objects graphically transformed and given a body through the chromatics of paint. And then, as of late, she begins with nothingness or ‘no-thingness’. “I love the emptiness to being with, for the surprises there are far greater and so are the challenges of starting afresh to structure ‘the real’ each time. What others may call abstraction is very real for me”. Sheila is currently working in gouaches on small formats. From the dazzling hues she has moved to subdued colour harmonies – as if a shrill voice has become a soft whisper reflecting a quieter spirit. The remarkable tonal variations, the sense of the shadow, the tensile, tactile and insectile quality of her work create a delicate spatial configuration. Moving lines rhythmically in and out of space, she encloses space through pictorial fences and release it through flying lassos and moving threads, making it fluid enough to allow both time and sound to enter the creation and out awareness as well.

Sheila’s works strongly suggest the notion that art is only interested in its own reality and the expressive act, the powerful human tool works to rescue us from the factual mundane reality.