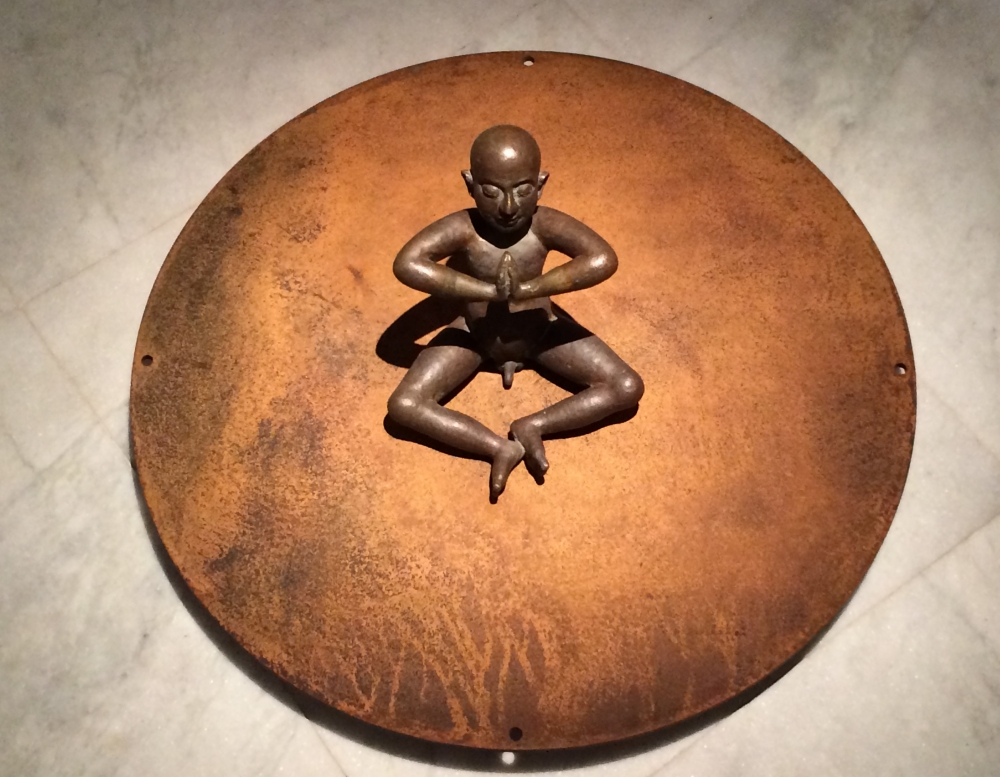 Magic Under the Skies

You cannot ignore her. Placed in the centre of the space, she stands erect, her hair in a pointy coil heading to the heavens, while her feet are planted on a rounded mound. Not a stitch of clothing covers her, yet she is comfortable in her nakedness, radiating a strange aura. The mound below her feet resembles two earthenware containers co-joined at the mouth. Like a medium she appears to be channelling some divine energy from the earth into the heavens above. N.N. Rimzon’s sculptural work Forest at Night reflects his preoccupation for the past several decades: the interplay between the three worlds – heaven, earth and the collective unconsciousness.

The forest sprite is part of a pantheon that inhabits the artist’s solo exhibition Forest of the Living Divine at Delhi’s Talwar Gallery from the 27th of January till the 28th of May – Rimzon shows after a long gap of 23 years. Equally imposing is his work Big Maa on the roof of the gallery. Multiple breasts appear to sprout from a lingam-like structure, combining both male and female principles. Here, upturned containers put in an appearance once again. Rimzon has also been involved in trying to deconstruct the meaning of archetypal images and freeing them of the restrictions places on them by history or tradition. He often places his figures in unusual juxtapositions, queering the pitch and interrogating his audience’s preconceived notions. This can be seen in the basement of the gallery, where in Dancer with Four Arms, a nude four-armed male figure appears barricaded behind a stone wall, a sword hidden in the crevices of the loosely placed boulders. The anthropomorphic puts in an appearance in Mother at the forest, where a woman’s protruding belly appears to give rise to lush vegetation.

Material plays a central role in Rimzon’s work and he is keen to explore its metaphysical content. Eschewing classical materials such as bronze and marble, his early forays were in the realm of found or arte povera materials ranging from crates to string. Later, he turned to fiberglass, using it like he does in the sculptural works in the exhibitions, to mimic more classical materials. With consummate ease, he ensures that his sculptures take on the patina of ancient bronze or the more earthy hues of terracotta. Combining the fiberglass with resin and marble dust, he bestows on his sculptures a sense of solidity and gravitas.

Themes of fecundity and fertility underline the show, whether in the aforementioned Mother at the forest or in his spare but powerful charcoal drawings. An egg-like form puts in an appearance in both his bronze and charcoal works. There is a sense of the ‘naïve’ or the ‘primitive’ that pervades his depictions of the tropical Kerala landscape, where trees laden with jackfruit lie beneath star-spangled skies. In one of his drawings, a naked woman with flowing tresses assumes a dancer’s pose, with one foot resting upon a skull. One wonders if she is an avatar of the Mother Goddess.

The spiritual is also referenced in Rimzon’s rendition of a South Indian temple with its tiled roof, while elsewhere in the bronze Tree at the Shrine, figures lie prostrate on the ground in some strange ritual. In Devotee, the small bronze figure, seated in a pool of light, has an air of peaceful serenity and enlightenment about him. In Forest of the Living Divine, Rimzon lures us into a wonderous, magical world where a serpent could well be coiled at the bottom of a bright blue lake or be unwinding across a starry sky.