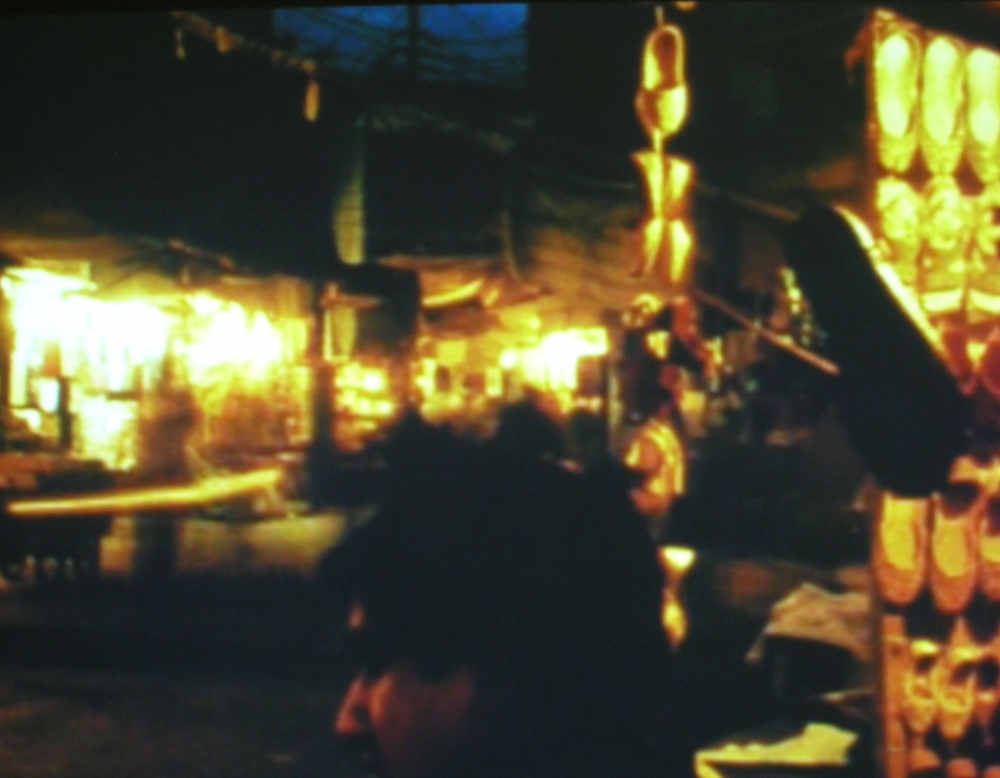 Set among the pre-modern Indian paintings and Hindu and Buddhist sculptures of LACMA’s South and Southeast Asia wing, Alia Syed’s Eating Grass (2003) is a dreamy filmic experience. “I dreamt of red wine,” says a female voice in a gentle timbre, ushering the viewer into a reverie that melds storytelling, memories, dreams, poetry and history all into one. This decade-old work, shot in London, Lahore and Karachi, was reinvigorated by its presentation among the gallery’s ancient spiritual heads. The paintings and sculptures too were renewed by the company of this contemporary palimpsest of prose and visual stimuli.

Eating Grass was first conceived in the 1990s, when the artist traveled frequently in and out of Karachi. During this time, she was routinely roused from slumber by the azan, the ritual Islamic call to prayer that takes place five times a day, around which citizens organize their lives. At first, she found these wake-up calls beautiful and soothing, but on one particular morning she was awoken by the harsh, grating chant of a distorted tape-recording. From this experience, five short stories—one for each of the daily calls to prayer—were born. Recited in overlapping English and Urdu voiceovers, these stories, along with the din of each city, provide the soundtrack to the film’s non-linear narrative.

A labor-intensive analogue process, which involves shooting scenes twice—first on 16mm film then with an optical printer—lends figures in the film a ghostly quality. Hundreds of faces crowd a city thoroughfare: a woman cuts local cloth with fabric shears, a still marketplace bustles with the activity of shoppers, passersby and scooter traffic. Changing times of day punctuate the scene with raking lights and ponderous shadows. Made up of jumbled narratives, with no neat beginning, middle or end, the film is absorbed much like an Abstract Expressionist painting, or the fragments of a dream. Various locales seem to meld together—imperceptible but for a telltale red phone booth or close-ups on local handicrafts—bound and connected by the lulling calls to prayer.

Through these interpolated narratives, Syed ponders the destruction of the self and tradition. One story, recounted to a backdrop of a bustling city scene that transitions to the quietude of a private apartment, recalls the death of two sisters after a rainstorm:

In the city where they lived, it hadn’t rained for five years. On the night that the washing was completed an unexpected downpour hit the city. That night and the following day the whole city rejoiced. All, except for the sisters, who were found by the maid weeks later, just before the beginning of the month of Muharram.

Another, derived directly from Syed’s experience with the disquieting electronic prayer call, describes a muezzin who has grown too fat to climb the mosque stairs:

They have forgotten to renew the tape recorders and the people are either too fat or too thin to have noticed.

Syed is interested in “problematizing simplistic perceptions of these times.” Rather than dissecting it, she incites viewers to passively observe the film, as if in a dream. Born of Indian and Welsh heritage, she is concerned with transcending and blending cultural barriers: “what happens when you hold more than one ‘culture’ within you at any given time.”

The title of Eating Grass draws upon a political reference that the film never directly addresses. Zulfikar Ali Bhutto, the president and prime minister of Pakistan for much of the 1970s, who was eventually overthrown and executed by the military, notoriously said: “If India builds the bomb, we will eat grass or leaves, even go hungry, but we will get one of our own. We have no other choice.” Syed’s choice of title intimates that in our attempts to advance, we run the risk of self-annihilation.